...the complete Nigerian football portal
Subscribe
Ex-Arsenal Winger Scores Brilliant Solo Goal After Running From Inside His Own Half
Published: May 06, 2017 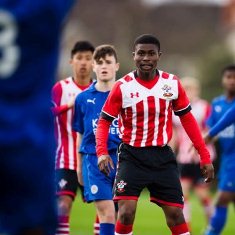 Former Arsenal youth-teamer Nathan Tella scored one of the best goals of his career but turned from hero to villain as Southampton lost 4-2 to Manchester City in Premier League 2 on Friday.

The exciting winger opened the scoring at the Academy Stadium when he ran from inside his own half, skipping past some City defenders with ease, including Tosin Adarabioyo, before firing past goalkeeper Hassen in the 43rd minute.

The 17-year-old Tella was later dismissed in the 90th minute for a second bookable offense.

Another Arsenal product, striker Olufela Olomola, started and lasted the distance for the Saints but could not prevent his side from being relegated to the Division 2.

Man City's Tosin Adarabioyo provided the assist for the crucial third goal scored by Charlie Oliver with 11 minutes left on the clock.

Tella ended his ten-year association with Arsenal in March after penning a deal until the end of the season with Southampton.