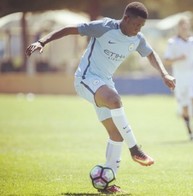 Tom Dele-Bashiru was among the scorers in Manchester City's 3-2 win over Blackburn Rovers in the U18 Premier League on Saturday afternoon.

Trailing by a goal, manager Lee Carsley introduced the attacking midfielder in the 79th minute and the change ultimately paid dividends, with the Nigerian leveling the tie six minutes later.

Dele-Bashiru's goal against Rovers was his fifth goal in the league this season and the sixth time he has found the net in all competitions.

The Citizens will face Bobby Adekanye's Liverpool in their final game of the season next Saturday at City Football Academy.