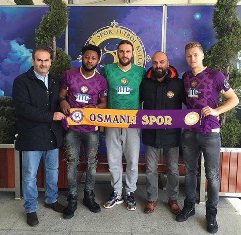 Raheem Lawal is having his most productive season in the Turkish top-flight, with the central midfielder bagging a brace in Kayserispor's 3-2 road win over Trabzonspor.

In scoring two goals, the Nigeria international will finish the season with at least four goals to his name, his best tally in the Super Lig since he arrived in Turkey five years ago from Spanish side Atletico Baleares.

Against Trabzonspor, four minutes before halftime, Lawal scored from outside the box to give Kayserispor a 2-1 lead.

With 15 minutes remaining, the former Dream Team star scored with his head after he was teed up by Welliton, a minute after he picked up a yellow card for pushing Eddy Onazi.

The Super Eagles assistant captain missed an opportunity to equalize for Trabzonspor when his shot from outside the box missed the goal with nine minutes left.