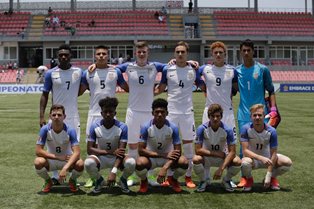 One of the top performers at the ongoing 2017 CONCACAF U-17 Championship, Ayo Akinola, dazzled as United States qualified for the Fifa U17 World Cup courtesy of their 6-2 rout of Cuba in the classification stage.

Prior to the contest at Estadio Maracaná de Panamá; Panamá City, the Toronto FC starlet tallied in games against Honduras, Jamaica (2) and Mexico.

In the 39th minute, Andrew Carleton finished off a brilliant counter attack move after he was teed up by Akinola, and gave USA a two-goal lead in the process.

The 17-year-old was replaced in the 62nd minute with John Hackworth's side leading 4-2.

Akinola is eligible to represent the Nigeria, United States and Canada at senior level.