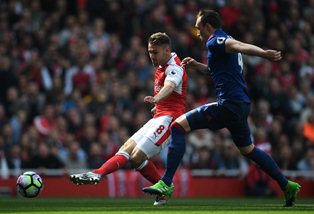 Manchester United lost a league game for the first time in six and a half months when Arsenal beat Jose Mourinho's team 2-0 at the Emirates Stadium on Sunday.

Because of some excellent goalkeeping, especially from David de Gea, the first half ended goalless, but Arsenal looked the better team and looked the most likely to make a breakthrough.

Welbeck came close on two occasions but his shots were blocked and the industrious Aaron Ramsey was denied by a word class save from the Spaniard.

Manchester United almost took the lead after slack defending by the opponents but they got away with it when Cech pulled off a fine save to deny Rooney in the 32nd minute.

On 55 minutes, Granit Xhaka from Arsenal opened the scoring with a shot from long range which deflected off Herrera and looped over De Gea.

It became 2-0 three minutes later. On his second attempt, Alex Oxlade-Chamberlain provided a magnificent cross to set up Welbeck, who headed home his third goal in four matches against his old club.

Super Eagles attacking midfielder Alex Iwobi was a non-playing substitute for the fourth straight game in the Premier League.