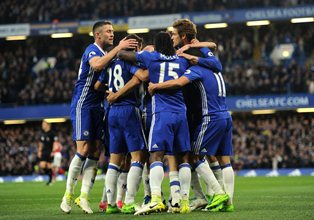 Chelsea are a win away from being crowned champions of the English Premier League for the fifth time after thrashing Middlesbrough 3-0 at Stamford Bridge on Monday night.

Victor Moses worked an industrious 90 minutes in the win by the Blues, which puts them seven points ahead of nearest challengers for the title Tottenham Hotspur.

Chelsea would have been 3-0 up before the break if the Nigeria international's effort was not turned behind by the
Boro goalkeeper Brad Guzan.

In the second half, the right wing-back had another great chance to score his fourth goal in the top-flight this season, but his shot was saved.

Diego Costa and Marcos Alonso struck in the first half, before Chelsea increased their lead through Nemanja Matic after 65 minutes.

Middlesbrough were relegated from the Premier League after their defeat to Chelsea.