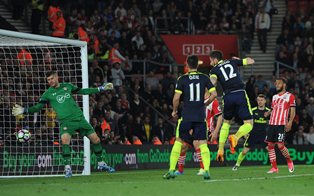 There is still life for Arsenal in their race for the top four and a 21st consecutive Champions League appearance following their hard-fought 2-0 win over Southampton at St Mary's Stadium on Wednesday night.

Super Eagles attacking midfielder Alex Iwobi remains out of favour, as he was a non-playing substitute for the fifth consecutive game in the English Premier League.

Thanks to the outstanding Petr Cech, it was still goalless at the end of the first half though the Saints had the better chances, with Nathan Redmond and Manolo Gabbiadini coming close to breaking the deadlock.

Arsenal showed their class in the second half and opened the scoring in the 60th minute through Alexis Sanchez when they needed him most.

On 83 minutes, substitute Olivier Giroud was allowed time and space in the six-yard box to direct his header past Southampton goalkeeper Fraser Forster.

Arsenal, who sit fifth in the table with 66 points, are guests to Stoke City in the next round on Saturday, March 13.