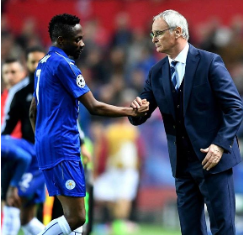 An unnamed Chinese Super League club have enquired about the availability of Ahmed Musa in the summer transfer window.

The Nigeria international turned down the approach from the Far East as he wants to remain in England and fight for a first team spot at the Foxes, having seen his playing opportunities limited in the second half of this season.

''Yes a Chinese club contacted Leicester about a transfer but Musa wants to remain in England to prove his worth and to play regular football,'' Musa's intermediary told supersport.com.

''He wants to work for his money. He's not the kind of person to just sit there earning easy huge wages without working hard for it.''

Tony Harris has done transfer business with a Chinese club in the past as he brokered the deal that took Super Eagles striker Obafemi Martins to Shanghai Greenland Shenhua in February 2016.