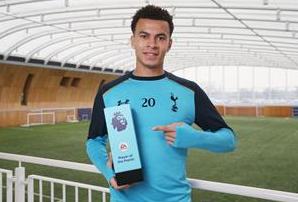 Chelsea star Pedro has beaten English-born Nigerian midfielder Dele Alli to the Premier League Goal of the Month for April.

The Tottenham wonderkid's goal against Watford on April 8 had been nominated for the accolade along with strikes from Pedro, Diego Costa, Roberto Firmino, Xherdan Shaqiri, Leroy Sane, Sam Clucas and Philippe Coutinho.

Pedro's ferocious strike versus Everton was voted the most eye-catching goal in the English top-flight last month.

No Nigerian player has won the Goal of the Month award since it was introduced by the Premier League for the 2016-2017 season.

In total this season, Dele Alli has netted 17 goals from 34 appearances in the Premier League.