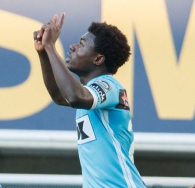 A brilliant strike from Super Eagles young star Moses Simon has won Gent's Goal of the Month award for April 2017.

The Nigeria international unleashed a powerful right-footed volley in the 25th minute of the Belgian First Division playoff game against Club Brugge that beat goalkeeper Butelle.

Samuel Kalu had whipped in a magnificent cross from the right flank which Moses capitalized on outside the six-yard box.

The 21-year-old has contributed to 12 goals from 41 appearances in all competitions this season.

He has been linked with a departure from Gent in the summer transfer market and West Brom are among the clubs credited with an interest.