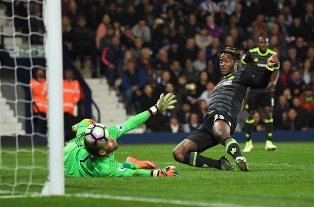 Chelsea have been crowned champions for the fifth time in the Premier League era following a hard-fought 1-0 road win over West Brom on Friday night.

Nigeria international Victor Moses sparkled once again for the Blues before he was replaced in the 86th minute, while Wales star Hal Robson-Kanu watched proceedings from the bench after passing a fitness test.

Hazard was at his best, Diego Costa occasionally burst into life but it remained goalless at the end of the first half, with Pedro having the best opportunity to open the scoring.

Chelsea had 14 shots on target (lots of them blocked), seven from outside the area, but could not find a breakthrough against a resolute West Brom defense.

On 47 minutes, a brilliant unexpected shot from Victor Moses was deflected for a corner, and Costa failed to get enough power behind his shot a minute later.

With 20 minutes remaining, Jose Salomon Rondon had a chance to give West Brom the lead, but the Venezuelan fell as he struck the ball,  two minutes later Nacer Chadli was beautifully placed but somehow managed to miss the target.

Michy Batshuayi scored the goal that etched his name into the history books after 82 minutes. Shortly after coming off the bench, he slotted the ball past Foster from Azpilicueta's right-wing cross.

Chelsea got the job done as their closest challengers Tottenham Hostpur can't get any more than 86 points if they win their last three games.