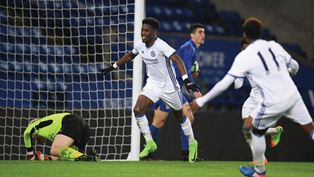 Nigerian wonderkid Ike Ugbo featured for Chelsea as they secured the the Under-18 Premier League title after a 3-0 rout of Akin Odimayo's Reading in the elite round on Friday night at Cobham.

Before Ugbo was replaced at the start of the second half, the striker made a bid to open the scoring, but his strike was off target.

The game remained goalless until the 57th minute when Gallagher scored, before goals from Harvey St Clair and Mason Mount secured the win for Jody Morris' side.

The result saw Chelsea move five points clear at the top of the table ahead of second-placed Arsenal, who host West Ham United in their final game of the season on Saturday morning.

Ike Ugbo scored 25 goals for the youth teams of Chelsea this season.