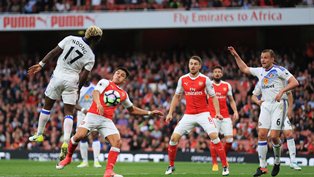 Arsenal maintained the pressure in their top four pursuit after beating Sunderland 2-0 at the Emirates Stadium on Tuesday night.

The home team had by far the better chances in the first half but it remained goalless at the break, thanks to superb goalkeeping by Black Cats' Jordan Pickford.

On the brink of half time, Aaron Ramsey shot and hit the target but the keeper saved it, and Rob Holding had a chance to break his Arsenal duck but his header was not powerful enough.

In the 63rd minute, Ozil was put through clean on goal but the German didn't have enough time to react.

Looking to add more bite to the Gunners attack and just under a quarter of the game remaining, manager Arsene Wenger brought on Welbeck and Alex Iwobi, who has been short of games over the past two months.

Alexis finally gave Arsenal the lead in the 72nd minute after Sunderland defenders failed to track his run, and the Chilean grabbed another goal from close range in the 81st minute.