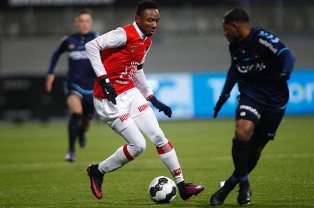 MVV Maastricht were held to a 1-1 draw by SC Cambuur in the semifinal of the playoffs at the De Geusselt (Maastricht) on Thursday night.

Nigeria U20 international Kelechi Nwakali opened the scoring in the ninth minute but his goal was cancelled out nine minutes later by Sander van de Streek.

The SC Cambuur defenders failed to track his run, before he slotted past goalkeeper  Zeinstra from just outside the six-yard box.

Nwakali, 18, has now contributed to six goals (3 goals, 3 assists) since he made his league debut against Ajax Amsterdam II.

The Limburg based club travel to Leeuwarden for the second leg on Sunday, May 21.