...the complete Nigerian football portal
Subscribe
Gent Winger Kalu Has Not Lost His Nose For Goal; Scores One, Creates Two
Published: May 19, 2017 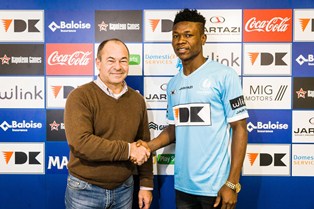 The young Nigerian winger Samuel Kalu had not scored a goal for Gent for the past two months, but on Thursday he contributed to three goals in their 5-2 rout of Zulte-Waregem at the GHELAMCO-arena.

At the break, Gent were two goals to the good, with their Nigerian wonderkid setting up the second goal scored by Saief.

Just before the hour mark it became 3-0. Kalu smashed the ball into the net, then teed up Kubo in the 83rd minute.

All the three Nigerians, including Super Eagles stars William Troost-Ekong and Anderson Esiti, that started for Gent put in a full shift, while Aliko Bala came off the bench for Zulte-Waregem in the 68th minute.

Kalu's other goals for Gent came in matches against Mouscron, KV Mechelen and Racing Genk in the Europa League, but he has already provided eight assists four months after his arrival in Belgium, same number he managed during his stay in Slovakia.

With the win against Zulte-Waregem, Gent are assured of finishing in the top three and will return to Europe next season.