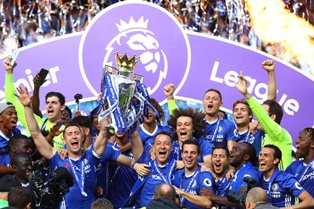 Catch up on the performances of Nigerian descent on the final day of the season in the English Premier League.

Arsenal missed out on a place in the Champions League for the first time in 21 years despite a 3-1 success over Everton at the Emirates. Alex Iwobi got some much needed game time when he came off the bench in the 68th minute for the injured Alexis.

Italy international Angelo Ogbonna put in a full shift in West Ham's 2-1 road win over Burnley. It was his first start in the Premier League since January 21 against Middlesbrough.

Super Eagles invitee Ola Aina ended the season with three Premier League appearances after he was left out of the champions squad list in their 5-1 rout of Sunderland. Victor Moses started and logged 90 minutes.

Black Cats young duo Josh Maja and Joel Asoro made the 18-man squad but watched proceedings from the bench. Teammate Victor Anichebe remains on the sidelines due to injury.

England star Dele Alli started and played for 73 minutes in Tottenham Hotspur's 7-1 hammering of Moses Odubajo's Hull City. Alli netted the third goal for his team in first-half injury time, and teed up Harry Kane for his hat-trick in the 72nd minute.

Wilfred Ndidi went the distance in Leicester City's 1-1 draw with Bournemouth at the King Power Stadium. Teammate Ahmed Musa was a non-playing substitute, while Cherries winger Jordon Ibe was introduced 17 minutes into the second half.

Defender Matthew Olosunde and Tosin Kehinde were not selected in the Manchester United team, who beat Crystal Palace 2-0 at Old Trafford.

There was also no debut for Olufela Olomola. The striker was not considered as Southampton lost 1-0 to Stoke City at St Mary's Stadium.

Over to the Liberty Stadium, Wales star Hal Robson-Kanu was in action for the last six minutes of West Brom's 2-1 loss to Swansea City.

Kelechi Iheanacho came off the bench in the 71st minute of Manchester City's 5-0 rout of Watford. Hornets striker Stefano Okaka put in a full shift at Vicarage Road, while teammate Isaac Success didn't make the squad.

Ovie Ejaria, Sheyi Ojo (both Liverpool), Dominic Solanke (Chelsea), Josh Onomah (Tottenham) and Ademola Lookman (Everton) are away on international duty with the England U20 squad in South Korea and didn't feature for their respective teams.