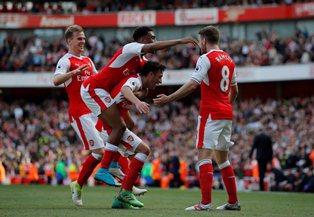 Arsenal winger Alex Iwobi has admitted that he is still learning his craft, and has praised his teammates in the wake of their 3-1 win over Everton on the final day of the season in the Premier League.

The Hale End Academy product has seen his first team opportunities limited in the last two months, with today's clash against the Toffees only his second game in the Premier League from a possible ten.

With Arsenal missing out on a Champions League spot for the first time in 21 years, Iwobi is expected to make his Europa League debut next season.

He will join the Super Eagles at their training camp in Paris after next weekend's FA Cup final against Chelsea.