...the complete Nigerian football portal
Subscribe
Talented Nigerian Defender Begins Showing Off With Manchester United In The Netherlands
Published: May 26, 2017 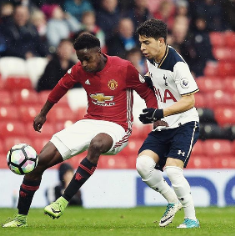 The talented Nigerian defender Matthew Olosunde will start showing off in the Netherlands on Friday when the prestigious Terborg tournament begins.

The right wing-back was part of Manchester United 18-player traveling party that arrived in the country on Thursday ahead of their opener against Ajax Cape Town.

While Olosunde and some exciting talents such as Angel Gomes, Aidan Barlow and Zak Dearnley have been chosen, the Nigerian-born midfielder Tosin Kehinde has not made the squad.

The United States youth international has seen his stock rise in recent weeks, making the provisional first team roster for Premier League games against Arsenal and Tottenham Hotspur, and trained with the squad before the Europa League Semi-final, Game 2 against Celta Vigo at Old Trafford.

His fantastic goal against Real Salt Lake in the Dallas Cup was nominated for Manchester United's April Goal of the Month award.