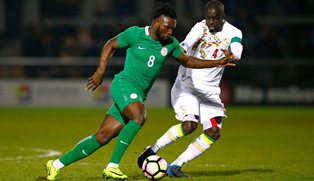 There is no mischief involved in the striker pulling out of the Super Eagles squad as he is currently down with a groin injury he sustained at Watford, and the Nigeria Football Federation are aware of his ailment.

As a result of the groin complaint, Success was conspicuously absent from the match day squads when the Hornets tackled Chelsea and Manchester City in their last two games in the Premier League.

Watford wrote to the Nigeria Football Federation straightaway when Success's name popped up among the invitees for the get-together in Corsica and Paris, demanding that he should be excused.

The former Granada starlet is presently in the United Kingdom but expected to arrive his homeland as from this weekend.