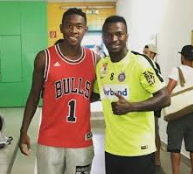 Nigeria international Olarenwaju Kayode claimed the top scorer award in the Austrian Bundesliga after the last round of matches in the division on Sunday.

The Austria Vienna frontman won the Torjäger-Krone accolade after finishing the season with 17 goals to his name, one more than closest challenger SK Sturm Graz star Deni Alar.

Alar had a good chance to overtake Kayode in the race for the Golden Boot, with the Super Eagle suspended on the final day of the season, but the former Austria U21 international fired blanks in Sturm Graz's 1-0 loss to Wolfsberger AC.

The ex-Golden Eaglets and Flying Eagles star is expected to receive more offers from bigger teams in Europe after winning the prestigious accolade.

Kayode is the first Nigerian player to top the goal-scoring charts since the Bundesliga was introduced in the 1974-75 season.