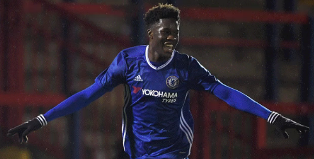 The 18-year-old Ugbo had not represented England at any level since he featured against South Korea at the 2015 Fifa U17 World Cup, before today's match against the African opponents.

The match was balanced in the first half but both teams failed to score until the first minute of the second half when Ugbo planted a superb header beyond the reach of goalkeeper Eduardo.

Angola were unable to get an equalizer and England tried to score another goal without success.

The defending champs face Cuba in their next match on June 1.