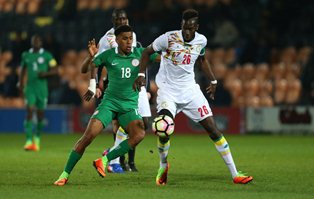 The attacking midfielder and winger linked up with the Nigerian national team at their training camp in Paris on Monday.

Iwobi and his family friend Ola Aina had been permitted to join the squad much later than other invitees because of their clubs involvement in the Emirates FA Cup final.

Manchester City striker Kelechi Iheanacho failed to keep his side of the bargain as he failed to turn up at the team's hotel  Hyatt Regency, Paris last night, following his trip to England last weekend.