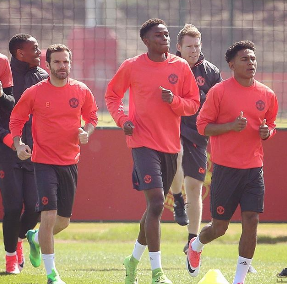 Highly-rated Nigerian defender Matthew Olosunde, 19, has spoken of his joy after Manchester United manager Jose Mourinho named him in his provisional roster for Premier League matches against Arsenal and Tottenham Hotspur towards the end of last season.

The right wing-back did not eventually dress for both games held in London, but reckons that he will be given more opportunities by the Portuguese next term.

Manchester United stars Wayne Rooney, Henrikh Mkhitaryan, David de Gea and Paul Pogba were in the traveling party to London, and Olosunde was honoured to mingle with these established players.

“It was a great experience traveling for the first team and I really enjoyed it,” Olosunde said to The Trentonian.

“I was not fortunate enough to make the squad but I hope for many other opportunities with them in the future.”

Speaking on his omission from the the United States U20 World Cup roster, he said : It’s always disappointing when you aren’t a part of events like the U20 World Cup.

“But I know a lot of the players that have gone and I have faith in all of them. It does make you want to improve more and work harder at your club to prove yourself.”

Apart from traveling with United's squad to London on two occasions, the highlight of Olosunde's season was finishing third in the club's Goal of the Month award for April.