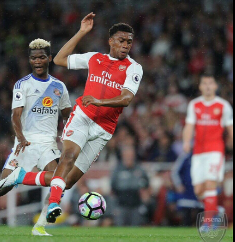 Nigeria international Alex Iwobi is prepared to go full-throttle when the new season begins on August 12, 2017.

The Hale End Academy product is aware that he has to impress Arsenal manager Arsene Wenger when pre-season training starts next month as he lost his spot in the first team in the final three months of the 2016-2017 campaign.

“I would be lying if I said I wasn’t disappointed not to be playing as much but as long as the team is going well then I can understand,” Iwobi told the online edition of The Sun.

“But I want to get myself back in the team. That is the aim of any young player.

At the end of the season, Iwobi could be representing Nigeria in a major tournament for the first time in his career if the Super Eagles qualify for the 2018 World Cup in Russia.

The 21-year-old claimed two assists in Nigeria's 3-0 rout of Togo in an international friendly on June 1.