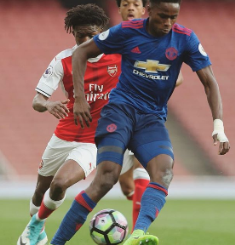 American-born defender of Nigerian parentage Matthew Olosunde has revealed that he is fulfilling his potential at Manchester United because of the conducive environment and relationship with his teammates.

In the just concluded season, Olosunde was in the Red Devils traveling party for Premier League games against Arsenal and Tottenham Hotspur but did not make the match day squad for both matches.

''It has been a great experience being a part of, and playing for, one of the biggest clubs in the world,'' Olosunde told the Trentonian Soccer.

''It’s a very friendly environment and everyone wants everyone to do well. We all try to help each other wherever we can and give credit where it’s deserved.

''At the end of the day we are all still competing and doing what needs to be done on the field.''

A United States youth-teamer, the former New York Red Bulls Academy talent was snapped up by Manchester United in March 2016, before he was promoted to the U23 squad last season.