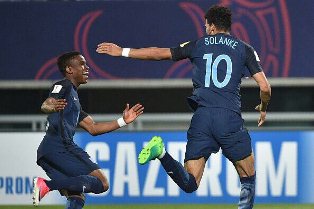 Chelsea, Tottenham Hotspur, Everton players of Nigerian descent plus the Liverpool-bound Dominic Solanke have taken to social media to express their happiness after England qualified for the last four of the 2017 Fifa U20 World Cup with a 1-0 win over Mexico.

Solanke is enjoying life in South Korea, with the striker netting the winner for the Young Lions two minutes into the second half, and that goal brought him level with Lookman as the team's top scorer.

Onomah, who was sent off after 72 minutes, praised his teammates for soldiering on, tweeting : ''Lost for words... but credit to the lads hanging on to a good performance vs Mexico. Onto Italy now for the semis ! #U20WC''

England's reward for beating Mexico is a semifinal tie with Italy at the Jeonju World Cup Stadium, Jeonju on Thursday, June 8.