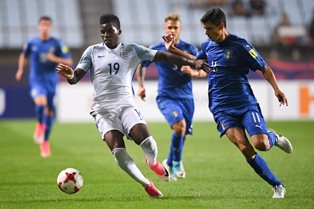 Italy U20 manager Alberico Evani has rued his side's 3-1 loss to England in the semifinal of the Fifa U20 World Cup, and admitted that the introduction of Sheyi Ojo changed the outcome of the game.

The Liverpool winger of Nigerian descent was a constant threat after coming on in the 54th minute, hit the woodwork, had three scoring opportunities and was involved in the build-up to two goals scored by Dominic Solanke and Ademola Lookman.

''England deserved the win, we played well in the first half but then we ran out of energy,'' said Evani to the official website of the Italian Federation, figc.it.

''We were tired in moving the ball , they created different chances and were able to score three with the help of their wingers.

Italy will contest the third place playoff against Uruguay on Sunday, June 11, before England attempt to win the World Cup for the first time in their history when they take on Venezuela.