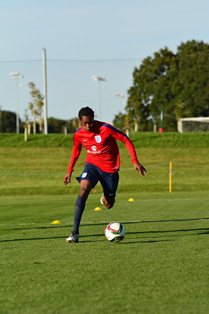 England have qualified for the final of the Toulon Tournament for the second year in a row after thrashing Scotland 3-0 at the Stade Parsemain, Fos-sur-Mer in the semifinal on Thursday evening.

Chelsea wonderkid of Nigerian descent Ike Ugbo returned to the Young Lions starting lineup after he was omitted against Cuba and Japan, while midfielder Tariq Uwakwe was a non-playing substitute.

A brace from Barnes and Embleton's 50th minute effort secured the win for the Young Lions.

Earlier today, England's U20 team qualified for their first-ever World Cup final after coming from behind to beat Italy 3-1, with Dominic Solanke and Ademola Lookman registering their names on the scorecard.

Ugbo, who scored in the Young Lions opener versus Angola, was replaced after 64 minutes.