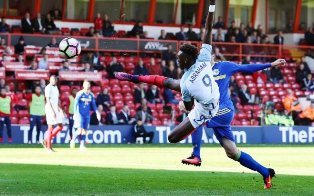 Sweden's Gustav Engvall has pinpointed Chelsea striker Tammy Abraham as the most dangerous player in the England squad ahead of Friday's European Under-21 Championship match between the two countries.

The Bristol City loanee has highlighted the qualities of Abraham, and has advised his teammates to frustrate him from the start of the game.

''He is a great person, fun, fun and above all he is a good football player who is fast and scores many goals,'' Engvall was quoted as saying by corren.se.

''He's good in the box, it's good to keep him quiet early. Then it's important to get a good start when playing against him.''

Abraham, 19, debuted for the England U21s in an U21 Euro qualifier against Kazakhstan last October before making his full debut against Bosnia and Herzegovina.