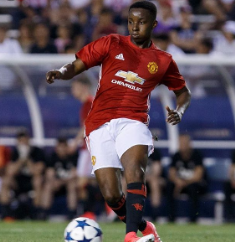 Europa League winners Manchester United have announced their pre-season schedule for the U18s and U23s ahead of the resumption of the new season in August 2017.

Defender Matthew Olosunde, who is holidaying in America, and Lagos-born midfielder Tosin Kehinde must return to Manchester before July 8 as that is the date the Old Trafford side will begin a week long camp in Austria.

The pair were not on international duty for the United States and Nigeria respectively in May and June, therefore, they will not be allowed to report to the training camp late.

Manchester United will compete in the SuperCup NI (formerly known as the Milk Cup), the Youdan Trophy and the Otten Cup during pre-season, but Kehinde and Olosunde are not eligible to take part in the competitions.

The two youngsters will be hoping to make their first team debut for United in the new season, having impressed for the U18s, U19s and U23s.