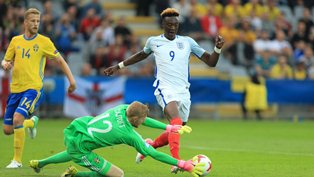 Chelsea striker Tammy Abraham was kept at bay as England were held to a goalless draw by Sweden in both countries opening fixture at the 2017 UEFA European Under-21 Championship in Poland.

The Newcastle United and Brighton target was the only player of Nigerian descent on parade at the Kolporter Arena, with Sweden starlet Joel Asoro suspended and Wolverhampton Wanderers defender Dominic Iorfa on the bench for the entirety of the game.

On ten minutes, Abraham came close to breaking the deadlock when his volleyed effort failed to hit the target, and he missed a huge chance again when his bicycle kick did not hit the intended target just before the end of the first half.

Pawel Cibicki was denied by the woodwork just before the hour mark for Sweden, before the Young Lions goalkeeper Jordan Pickford saved a penalty taken by Linus Wahlqvist nine minutes from time.

In their next fixture in the tournament, Adrian Boothroyd's side face Slovakia on Monday, June 19, while defending champions Sweden tackle the hosts Poland.

Chelsea midfielder Nathaniel Chalobah picked up the Man of the Match award.