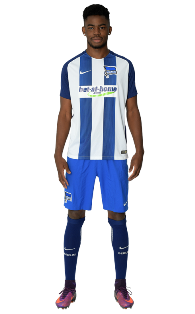 German-born Nigerian defender Jordan Torunarigha is in the running for the prestigious Bundesliga Rookie of the Season award.

Torunarigha, who is a Germany U20 international, made his Bundesliga debut against FC Ingolstadt in February, and racked up eight appearances over the course of the season, scoring his maiden professional goal versus SV Darmstadt 98.

The 1.89-metre-tall left-footer won the Bundesliga Rookie of the Month for May, before helping Germany reach the second round of the Fifa U20 World Cup.

He has revealed that he wants to play for Manchester United in the future.