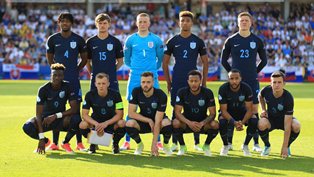 England kept their UEFA European Under-21 Championship dream alive after coming from behind to beat Slovakia 2-1 at the Kolporter Arena, Kielce on Monday evening.

In a must-win game for manager Adrian Boothroyd's side, they had a lot of work to do after going behind midway through the first half when Martin Chrien scored.

The Viktoria Plzeň midfielder put Slovakia ahead with an excellent header after Albert Rusnak swung in a corner from the left.

Chelsea's Tammy Abraham had a chance to restore parity in the 36th minute but he headed wide.

Five minutes after the restart, Alfie Mawson bundled in the rebound after his initial effort was saved by the goalkeeper.

On the hour mark, Nathan Redmond's deflected effort gave England the lead and they held onto their one-goal advantage until the final whistle.

Tammy Abraham was replaced with two minutes remaining while Wolverhampton Wanderers defender Dominic Iorfa was a non-playing substitute for the second straight game.

The Young Lions will be certain of progressing to the next round if they avoid defeat in their final Group A game against hosts Poland on Thursday.