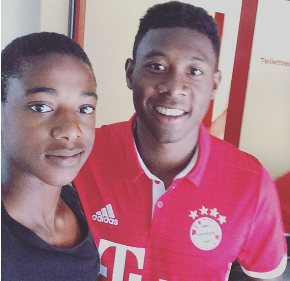 Bayern Munich wonderkid Kimberly Ezekwem has revealed that Austria international of Nigerian descent David Alaba is the player he looks up to and is waiting to step into his shoes at the Bundesliga champions.

The German-born left wing-back is concentrating on his studies and will make a decision on the national team he hopes to represent in the near future.

''My father and mother are Nigerians. I am too young to play for Nigeria now, I won't say too young but I am concentrating on my studies,'' said Ezekwem to allnigeriasoccer.com.

''I don't like rating myself. David Alaba is my role model at Bayern because I love the way he plays.''

The 16-year-old Ezekwem featured for the youth teams of SC Freising, SE Freising and 1860 Munich before he was acquired by Bayern Munich.

He was one of the most impressive players for The Bavarians at the Puskás Cup held in Hungary this month.