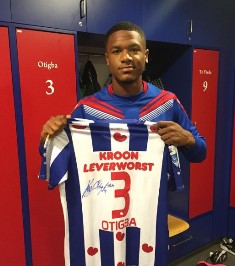 The former Hungary youth-team skipper, who has committed his international future to Nigeria, was on loan at Kasimpasa last season, and scored three goals in 20 appearances in all competitions.

''It was a good move to go to Kasimpasa because I learned a lot,'' Otigba told Nemzeti Sport.

''Before that I was one of the strongest players in the championship, but in Turkey I faced a number of strong and fast footballers.''

Quizzed on the toughest opponents he faced in the Super Lig, Otigba replied : ''Robin van Persie, Samuel Eto'o or Vágner Love are skillful, but the hardest part was against Galatasaray, Lukas Podolski and Wesley Sneijder.''

The 24-year-old Otigba was approached by Premier League side Liverpool before he signed for Heerenveen in 2008.