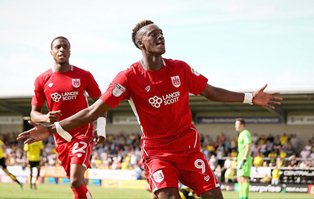 Tammy Abraham has taken a subtle dig at his England U21 teammate Lewis Baker after the Chelsea midfielder stopped him from taking a penalty kick he won in the Young Lions game with Poland.

Austrian referee Haral Lechner pointed to the spot after Abraham was tripped in the box by Jan Bednarek in the 82nd minute.

The 19-year-old was delighted England qualified for the semifinals, but had wanted to open his goalscoring account in the competition.

''Good team performance today from the boys 👌🏾nice to get bounced off the pen by @lew_baker 🤣😘onto the semisssss 🎉🎉#Eng21s,'' Abraham tweeted on Thursday night.

''Thank you for the messages and support behind me and the boys ❤️much appreciated.''

Abraham has ten appearances under his belt for the U21 national team of England and has scored three goals, including his strike versus Iceland in a friendly this month.