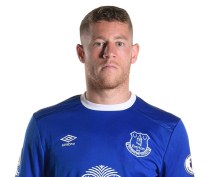 England international of Nigerian heritage Ross Barkley wants to quit Everton before the close of the transfer window.

The Sun says the Liverpool-born attacking midfielder is determined to secure a spot in the Three Lions roster for the 2018 World Cup, and needs to be playing on a regular basis next season.

With the arrival of Davy Klaassen from Ajax Amsterdam, Barkley will fall down the pecking order of midfielders, especially as he has a frosty relationship with manager Ronald Koeman.

The 23-year-old plunged his future into doubt after refusing to put pen to paper on a new contract, and the Toffees are willing to cash in on the player rather than risk losing him for nothing next summer.

He has not played for the England team since his appearance as a second half substitute against Australia in 2016.