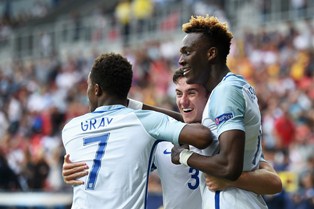 Germany beat England on penalties to qualify for the showpiece game of the ongoing European U21 Championship in Poland on Tuesday evening.

The two teams could not be separated in normal and extra time, with Germany grabbing the equalizer in the 70th minute (2-2) through Schalke 04 striker Felix Platte before triumphing 4-3 in the shoot-out.

Davie Selke scored with a header to give Germany the lead in the 35th minute, but the Young Lions leveled four minutes before half-time through Demarai Gray.

Chelsea striker of Nigerian descent Tammy Abraham netted his first goal in the tournament in the 50th minute.

The 19-year-old tapped home from close range after Will Hughes directed a ball into his path.

In the penalty shoot-out, Abraham and Redmond failed to convert for England, while Gerhardt missed Germany's second spot kick.

England manager Adrian Boothroyd used his fourth substitution to bring on Wolverhampton Wanderers defender Dominic Iorfa in the 106th minute for his debut at the U21 EURO.