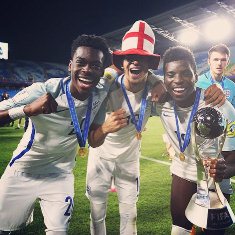 The England U20 international was part of the Young Lions squad that won the World Cup in South Korea earlier this month, and it is assumed he will be given a few days off before he reports at the Melwood training center in July.

Ejaria posted on Instagram with an accompanying photo in a Liverpool jersey : ''soon back at it !''

The 19-year-old made his unofficial debut for the Reds in a pre-season fixture against Tranmere Rovers, and would have made more than the eight appearances he recorded for the first team in the 2016-17 campaign if not for an ankle injury he sustained against Wolves in the FA Cup.

A product of Arsenal, Ejaria is eligible to represent Liverpool in next season's Champions League whether or not he's included in their A List as he has spent the last three years at Anfiled and is an U21 player.