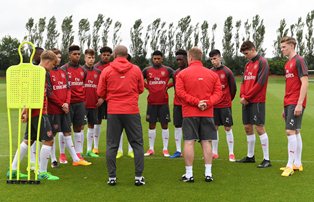 Three players of Nigerian descent recently signed scholarship terms with FA Cup kings Arsenal, and they have been handed squad numbers for the new season along with two other talented Nigerians.

England U16 international Xavier Amaechi will wear the number 72 kit and the highly-rated midfielder Folarin Balogun takes the number 74 jersey.

James Olayinka will suit up with the number 86 shirt, the two friends, both defenders, Joseph Olowu and Tobi Omole have been handed the number 87 and 88 kits respectively.

The aforementioned players are expected to be heavily involved for Arsenal U18 team in the 2017-2018 campaign, but can be called upon for U23 matches and the first team.

Olowu and Omole are in the second year of their scholarship with the Gunners.