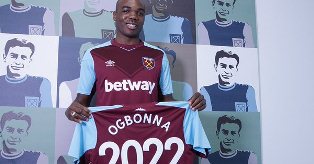 Italy international of Nigerian descent Angelo Ogbonna has extended his contract with Premier League side West Ham, informs the Hammers on their official website.

The 29-year-old has penned a five-year contract that will keep him at the London Stadium until June 30, 2022.

West Ham face Manchester United in their season opener on August 12, and the central defender says he's ready for the hard work in pre-season, ahead of the trip to Old Trafford.

“I’m very excited (for the start of the season). I cannot wait for the Manchester United game, not just me but also our whole team, ” Ogbonna told West Ham's official website.

“Everyone wants to show themselves but we have to be focused and prepare for that game by working hard in pre-season.”

Ogbonna joined West Ham in the summer of 2015 from Italian champions Juventus.