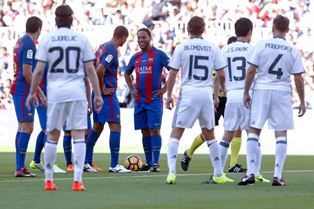 Manchester United Legends defeated Barcelona 3-1 at the Camp Nou on Friday night in a charity game.

At least one player of Nigerian descent would have featured for the Red Devils and Blaugrana, but former Super Eagles stars Emmanuel Amuneke and Gbenga Okunowo, and ex-Republic of Ireland defender Paul McGrath were not picked.

On 14 minutes, Manchester United took the lead through Blomqvist, who tucked home a loose ball from close range.

The home team fell behind again twelve minutes into the second half when Poborsky applied the finishing touch to a good move involving Yorke and Park.

Yorke netted a third goal for United in the 77th minute, before Dehú grabbed a consolation for Barcelona late on.

Almost 50,000 fans were at the Camp Nou, and all the benefits for the match will go to the PCCB (Pediatric Cancer Center Barcelona) project at the Hospital Sant Joan de Déu.