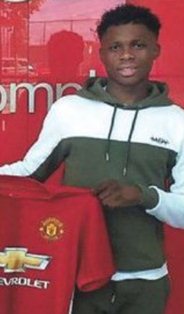 Belgium football expert Kristof Terreur of Het Laatste Nieuws has informed that Largie Ramazani, who is also in the possession of a Belgian passport, has signed a deal with Manchester United.

The 16-year-old, who is a striker, started off his career with the youth team of RSC Anderlecht, before he was apparently acquired by Charlton Athletic.

The highly-rated prospect is likely to train with Nigerian quartet Mipo Odubeko, Deji Sotona, Michael Elechi and Shola Shoretire in the forthcoming season.