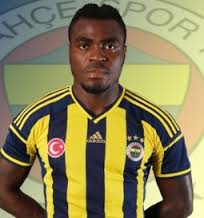 Greek Super League champions Olympiakos are on the verge of announcing the signing of former Nigeria international Emmanuel Emenike.

This will end speculation surrounding the future of the Fenerbahce striker, with earlier reports linking him with a possible return to the Russian Premier League as well as Israeli, Czech Republic and Ukrainian teams.

An Olympiakos insider told allnigeriasoccer.com : ''Fenerbahce have confirmed to me that Emenike will travel to Greece today, Monday. He is expected in Athens today for the medical.

Emenike, 30, previously wore the jerseys of MP Black Aces, Cape Town, Karabükspor and Spartak Moscow, and spent a portion of the 2015-16 season on loan at Premier League club West Ham.