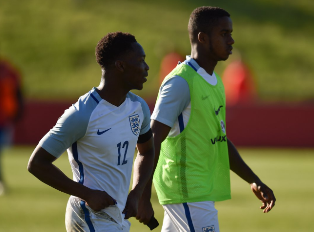 England have reached the final of the 2017 UEFA European Under-19 Championship following their hard-fought 1-0 win over the Czech Republic on Wednesday evening.

Fulham midfielder of Nigerian descent Tayo Edun started his fourth straight game for the Young Lions and lasted the distance at the Mikheil Meskhi Stadium, Tbilisi.

It was goalless at the break but Keith Downing's side came closest to breaking the deadlock when skipper Jay Dasilva hit the post.

In the fourth minute of stoppage time, England grabbed the winning goal when Marcus Edwards got free and delivered a low centre that Nmecha forced in at the near post.

England will face Portugal in the final on Saturday, July 15.