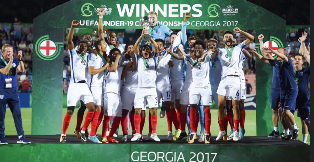 Scouts from top European teams were among the spectators at the recently concluded 2017 European U19 Championship in Georgia.

Mysports.ge says the teenagers that were in action during the tournament were watched by representatives of Arsenal, Manchester United, Liverpool and Everton.

London-born Nigerian wonderkid Tayo Edun was one of the most important players for the England U19s squad in Georgia, with the Fulham midfielder starting every single game contested by the new European champions.

The versatile 19-year-old can be deployed as a defensive midfielder, left wing-back or wide midfielder.