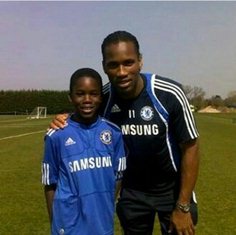 Chelsea's Nigerian goal machine Ike Ugbo might have gotten some lessons from two-time African Footballer of the Year Didier Drogba on the act of scoring goals.

Allnigeriasoccer.com has in its possession an old photo the England youth international took with the highest scoring African in the history of the Premier League, Drogba.

Ugbo was less than six years old when Chelsea acquired Drogba from French club Marseille in the summer of 2004 for £24 million.

The young striker joined Chelsea as an Under 10, and was initially a midfielder before a change in position saw him convert to a striker.

In the last three seasons, Ike Ugbo netted 60 goals for Chelsea's youth teams and this attracted the attention of Barnsley, who have signed him on a season-long loan.