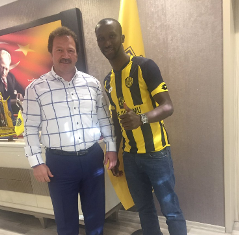 The 28-year-old attacking midfielder is the second Nigerian player to be acquired by MKE Ankaragücü in the summer transfer window, as they have also struck a deal with striker Olanrewaju Kehinde.

Ozokwo is joining MKE Ankaragücü from Swiss Challenge League side FC Wil, for whom he made 18 appearances, scoring 3 goals over the course of last season.

A product of Enugu Rangers, Ozokwo has also worn the colours of Nice, Boluspor, Mersin İdmanyurdu and Adanaspor apart from the aforementioned team.

He helped Nigeria reach the quarterfinals of the 2007 Fifa U20 World Cup in Canada.