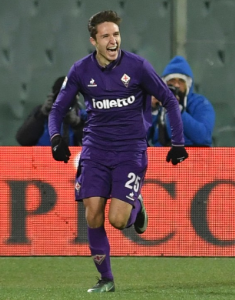 Manchester United and Chelsea are in a tug-of-war for the services of Fiorentina teen sensation Federico Chiesa, according to reports.

Tuttomercatoweb.com says the two Premier League giants have moved quickly in the last few hours in their pursuit of the Italy U21 international.

Chiesa represented Italy in this summer's European U21 Championship and bagged assists in games against Denmark and Germany.

The 19-year-old winger is contracted to the Viola until June 30, 2021, and the club don't want to sell him after parting company with five players this summer.

Borussia Dortmund are targeting Federico Chiesa to replace Ousmane Dembelè who is on the radar of Barcelona, while Napoli are prepared to pay 40 million euros for his services if they qualify for the Champions League.