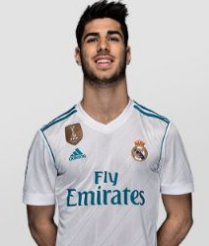 According to Marca, Los Blancos higher-ups are planning to offer the Spain international a new contract until the summer of 2023, with a buy-out clause of 500 million euros (approximately N214 billion) inserted into the agreement.

It is a law in Spain that players can buy out their own contracts, for example the recent transfer of Neymar to Paris Saint-Germain and Nigeria star Obafemi Martins paid €3 million (N1.3 billion) to buy out his contract with Levante before he was allowed to join Seattle Sounders in 2013.

Liverpool and Arsenal have been heavily linked with a move for Marco Asensio this summer, but Real Madrid are set to fend off their interest by offering the winger a new deal and raise his wages to 4.5 million euros every year.

Real Madrid chiefs consider Asensio as a long-term replacement for Cristiano Ronaldo, and the English Premier league teams will certainly be put off by his huge buyout clause.